I’m not sure why it worked like this. I expected to stay in processing, like my friends, for months. It may have been the media attention surrounding my case. I also had a friend that I used to play music with that had once worked as a caseworker at this very prison, so for a while I suspected that maybe he had something to do with it. I never did find out why, but I didn’t spend much more than a week in processing. Early one morning, and by early I mean around 2:00 am, I was instructed to gather my things and get ready to ship out. I would have breakfast, and then board the bus to my new destination, wherever that happened to be.

After breakfast we were taken to a waiting cell. There were about eight or nine of us in there, sitting on concrete benches that were built into the walls. We stared awkwardly at the ground not quite knowing what to say. I didn’t know what to expect. Frightened, anxious with anticipation, still sad that this was my new life, I didn’t know what to expect. I didn’t know where we were going, how long it would take to get there. I had seen the rolling cages that are prison buses on the highways before, was that what we would ride on?

I’m not sure how long we were there waiting; It felt like hours. Eventually the awkward silences were broken and we guys started telling stories about their past lives prior to incarceration.

One guy said that this was his second time back inside. “That crack,” he explained. He said that he had gotten out and landed a good job driving an ice-cream truck, “mostly in the hood,” he said. Things had been going pretty good, but eventually he ran into an old friend that offered him a little blow. He took it, and one thing led to another and as he explained it he sat in that truck for about three days straight with a friend, smoking crack. He said,” Man little kids was walkin’ past us just shootin’ us da bird. They was pissed! We was out of ice-cream. What we couldn’t sell just ended up melting.” We were all falling over laughing, thinking of all of these kids looking at the empty ice-cream truck that had been sitting there for three days straight with the ice-cream man all jooked up on crack.

Another guy said for him it had been heroin. He told a story about him and this girl he had been shacking up with for a little while, “pretty girl,” he said. They ran out of heroin. He said that they came up with this idea where she would go to a local trailer park where a bunch of migrant workers lived and she would prostitute herself, so they could get enough money to buy some more smack. They had driven over there, and he had sat in the car waiting. “Man, she was gone for like 6 hours straight. I was thinking that we were gonna be rich! Sittin’ there, all excited. She came back and had like twelve dollars!”

“Twelve dollars?” Someone exclaimed with disbelief. “What was she doin’ in there all that time?”

“I have no idea. Never did find out. Fuck it, right?” We had a pretty good laugh over that too.

Finally, a guard came and we got on the bus. I was given a string of numbers and told to memorize them, but I wasn’t prepared for this. He just read them off to me and said, “Don’t forget these numbers!” as I boarded the bus, my little plastic shipping bag in my hand.

The inside of the bus was just a cage. The driver, and the guard that was riding with him were in a section completely separated from the rest of us. I could see a rifle up there. The rest of the inside just looked like an old school bus. About an hour and a half into the ride I started squirming, I had to pee so bad. I didn’t know what to do. I was pretty certain that this driver wouldn’t pull over to a gas station for me. I busied myself by looking at the people in the cars out the windows as we traveled down the highway, wondering where they were going. I missed my life. I missed having a life to miss.

My bladder was going to explode. I was sure of it.

The guy in front of me woke up and sat up. I said, ”Any idea where we might be going, or how long it will take to get there?”

I sat there uncomfortably for a few more minutes.

“Man, I have got to piss.” I said, hoping he would interject some idea of how to go about this.

“I guess you should just go.” He said, uncomprehendingly.

A few more minutes. Finally I couldn’t take it any more. There was a drink cooler in the back of the bus with some paper cups next to it. I would just have to go back there and fill up those cups. They would just have to understand. I wasn’t going to sit here and pee all over myself. I stood up and walked to the back of the bus making a beeline towards the cooler. When I got there, to my amazement, I saw a toilet! Thank goodness. I had missed it in the early morning darkness when we were boarding the bus. Oh my god. Relief. That might have been the best pee I have had in my life so far.

We made one stop at a strange kind of prison depot. I stepped off of the back of the bus and the guard asked me for my number, the one I was supposed to be memorizing. I tried. “0-8-6-7-1-2-4-something?” “Wrong.” He said flatly. He handed me a paper bag with some kind of food in it. “Get in the cage,” he said as he checked my name off of a list. There was a giant roofed cage with about a hundred other inmates inside eating, talking, sitting on toilets. I stepped inside with everyone else and they locked the gate behind us. The guards ate. We ate. Finally, our lunch break was over. We boarded our buses again and took off to our new destinations. In my case this would be Eastern Correctional Institute, in Maury, North Carolina, where I would spend about the next four and a half years of my life, and where I would eventually meet the love of my life for the very first time, the most incredible, thoughtful, and loving person that I have ever known. And now, today, as I write these words, she is standing in the kitchen, in our kitchen, just a few short feet away. My heart. 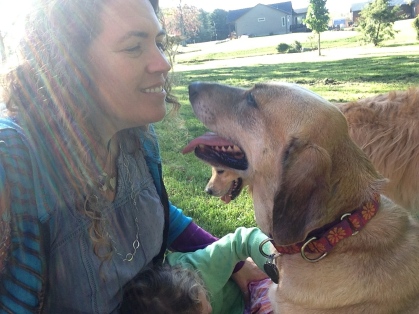 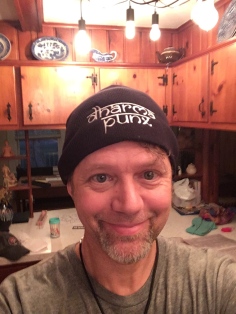